If you are visiting this site from a country that requires GDPR consent, please tick that you agree for us to collect visitor information via Google Analytics 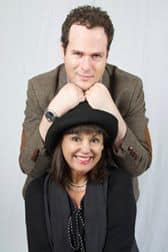 Two episodes with auteurs NADIA TASS & DAVID PARKER received terrific feedback from actors and the public. Another episode interviewed some of the cast from our play ‘The Wisdom of Eve’, and we had an episode on my favourite film, Bertolucci’s ‘Sheltering Sky’. Episodes  available on YouTube. Films of the plays that Meredith directed were made by Brian Walsh KAILASH STUDIOS.

Some of my favourite episodes: